Google Forms Kya Hai In Hindi: today Google Google has many great products using which it has become even easier to grow the business, one such product of Google is Google Forms, through which you can create different types of forms and collect your customer’s data.

So let’s start without taking much of your time, know more about this article Google Forms What is Hindi.

Google Forms is a product of the Google company, through which you can create an online form for the user. data can collect. You via Google Forms Survey, Job Apply, Contact Forms, Quiz Contest Forms etc. can be created. Google launched Google Forms on 6 February 2008. 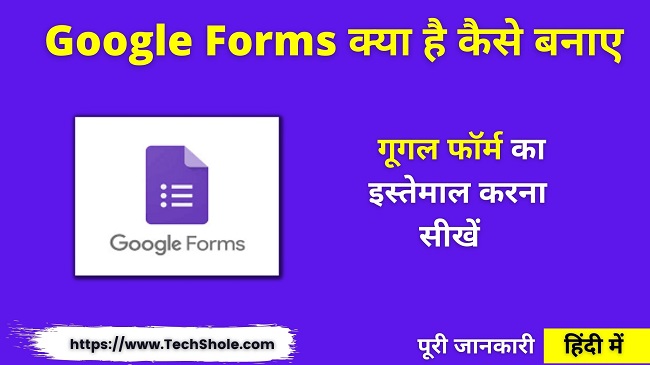 Google Forms all data google drive is stored in , which is a cloud based storage. So you do not have the fear of losing data in it.

In Google Forms, you get many Per Design templates which you just have to edit as per your requirement. If you do not want to use any template, then you can also create the form according to your wish through Blank Forms.

Google Forms Google Service G-Suite so to use it you have to have a google account Or it is necessary to have a Gmail ID. You can get notification of each entry in Google Form in your Gmail.

Following are some of the major features of Google Forms –

Apart from all this, Google Forms is also used for many tasks.

How to Use Google Forms (Step by Step)

You can use Google Forms in the following two ways –

To create a Google Form through the official website of Google Forms, follow the process given below –

2 – Use via Google Drive

After reading the article till here, you must have understood what is Google Forms, let us now know how to make Google Forms. Below we have told you the complete process of creating Google Forms, by following which you can easily create Google Forms.

#1 – First of all open Google Forms

First of all, open Google Forms in your favorite web browser. We have told you above the process of opening Google Form.

#2 – Select the Template for the Forms

After this you have to prepare a new Form. To create Google Forms, you get many template options on the home page. You can select any template according to you or you can also use Blank Forms. We will teach you how to create a Google Form in Blank Template.

As soon as you click on Blank Forms, the interface will open in front of you as in the image below. In this, you get many options by which you can create a great form. Let us understand all the options present in this page of Forms.

We have explained all the options present in the form in order of number on the options written in the image.

You can create any type of Forms as per your requirement. If you want to see the preview of Forms, then you can see from the Preview option above.

When you have created Google Forms, you can share the Forms with people through various mediums by clicking on the Send button at the top.

So by following this process you can easily create Google Forms.

How to Check Entry in Google Forms

When a user fills the Google Forms, you can see that Entry or Submission in two ways. Either by going to Google Forms or by getting Notification of Entry on your email.

To check the entry of Google Forms, follow the following procedure.

What is Google Forms?

Google Forms is a free tool software through which you can create different types of forms online. Like Survey, Quiz, Contact etc.

Google Form has been created by Google Company, which is an American company.

When was Google Forms created?

Google released Google Forms on 6 February 2008. It is a part of Google’s online service G-Suite.

Conclusion: What is Google Form in Hindi

Through this blog post we learned that Google Forms what happens, Google form How make Huh, Google form of use How do And Google form Of Features And Use what Is,

Google Forms is a very profitable product of Google which should be used by every business, service provider and blogger. All of them can easily collect their customer and visitor data through Google Forms.

So this is all in this article, hope you must have liked this information given by us, if you have got to learn something from this article, then do share it with your friends also.