If you want to know the answer to the above questions about Magnetic Disk, then you have come to the right article. Through this article, we have provided you complete information about magnetic disk so that all your doubts can be removed.

So let’s start without wasting time to know more about this article What is magnetic disc in hindi. 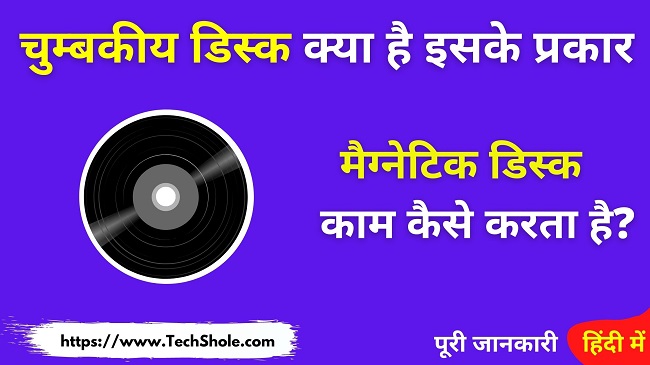 What is Magnetic Disk

A magnetic disk, also known as a magnetic disk, is a secondary storage device that data Uses magnetization process to read, rewrite and access. The magnetic disk is covered with a magnetic coating, it stores data in the form of tracks, spots and sectors.

Magnetic disk costs less than RAM and can also store a large amount of data. But secondary memory Due to this, the data access rate is the main memory slower than .

How Does Magnetic Disk Work?

A magnetic disc is a circular platter that looks like a CD. All platters range in diameter from 1.8 to 5.25 inches. The surface of each platter is divided into concentric circles called tracks. The outermost track is numbered 0 and the innermost track is the last track.

The track is further divided into sectors. The data on the disk is stored in sectors, the sector being the smallest unit that can be read or written. A disc has eight or more sectors per track.

The upper and lower surfaces of the platter are covered with magnetic material so that data can be stored on both sides of the platter. Magnetic discs are inserted into a magnetic disc drive for access, the drive has a read-write head that is attached to a disc arm, which moves the head. The disc arm can move in and out of the disc. The read-write head is an important part of the magnetic disk, which performs the task of reading and writing data.

There are mainly three types of magnetic discs –

hard disk A computer has a secondary storage device in which data is stored. Hard disk is a type of magnetic disk, it is also non-volatile memory. The data in it is not lost even when the power supply is turned off.

Data remains in the hard disk until the user intentionally deletes it. A large amount of data can be stored in a hard disk. The storage capacity of the hard disk can be up to 20 TB. one to drive hard disk Driver Which is called HDD (Hard Disk Drive).

zip disc There is also a secondary storage device which is a little advanced from the floppy disk. The storage capacity of Zip Disk ranges from 100 MB to 250 MB. Zip Drive is used to play Zip Disk. At present, the use of zip disk is also very less.

The following are the characteristics of a magnetic disc:

Magnetic discs have many advantages such as –

Magnetic discs and optical discs both have secondary storage devices that are used to store data for a longer period of time. These two also have some similarities, but there are a lot of differences between the two discs.

What type of device is a magnetic disc?

Magnetic disk is a storage device.

What is an example of a magnetic disc?

Magnetic disk is an example of non volatile memory.

What are examples of magnetic discs?

Why are magnetic discs used?

Magnetic disk is a secondary memory device used to store data. Data can be stored permanently in a magnetic disk.

You have learned: What is Magnetic Disc in Hindi

Hope you have liked this article like all our articles, you must also share this article with your friends on social media and keep visiting our blog Techshole to read such informative articles.