CDSL Full in Hindi, Share Market There are many such terms in India, knowing about which it becomes easy for you to understand the stock market, one of them is CDSL Depository, about which an investor needs to know.

if you Internet looking for on What is CDSL And till now you have not got the exact information, then read this article completely, because in this article we have explained the basic information of CDSL to you in simple words.

In this article we have given you CDSL what is, CDSL When was it established CDSL purpose of, CDSL functions of and CDSL advantages and disadvantages of told about.

If you do not know anything about CDSL, then we have full hope that after reading this article, you will get correct information about CDSL. 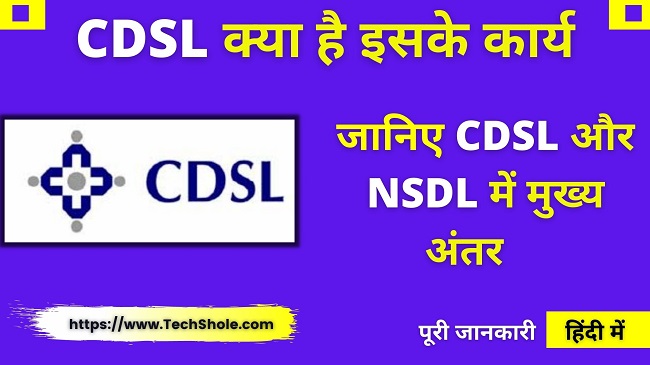 Therefore, to get information about CDSL, read this article till the end. So let’s start today’s article without wasting time – What is cdsl in hindi.

CDSL is a depository in India, which keeps shares, bonds, debentures and securities of investors safe in electronic form. CDSL Depository Bombay Stock Exchange (BSE) works for. This is the second depository of India. The headquarter of CDSL is located in Mumbai.

this one Bank It is similar to the way the bank keeps the public’s money safely deposited, the same role is played by the depository in the stock market.

When was CDSL established

CDSL was established in February 1999. Former Union Finance Minister Shri Yashwant Sinha established CDSL. CDSL is recognized by the Securities Exchange Board of India (SEBI), it is also a depository SEBI Works under the rules of. The headquarter of CDSL is located in Mumbai. CDSL is jointly sponsored by some big banks along with BSE.

Following are some of the major functions of CDSL –

Disadvantage of Securities in Hindi

Difference between CDSL and NSDL (CDSL vs NSDL In Hindi)

Both CDSL and NSDL are electronic depositories of India, so there is not much difference between the two. But we have told you about the differences between CDSL and NSDL through the table below.

CDSL is an electronic depository of India, where shares, bonds, debentures and securities of investors are stored in electronic form.

What is the full form of CDSL?

The full form of CDSL is Central Depository Services Limited.

When was CDSL established?

CDSL was established in February 1999.

Where is the headquarter of CDSL?

The headquarter of CDSL is located in Mumbai.

Conclusion: What is CDSL in Hindi

After reading this article you must have understood that What is CDSL In English And what are the functions of CDSL. We have tried in this article to provide you complete basic information about CDSL Depository. If there is any information left in this article, then you can give your suggestions in the comment box.

hope you like this article cdsl full form in hindi You must have liked it, in the end we request you to share this article with your friends on social media.