Memory Kya Hai In Hindi – almost all of you computer Must have heard the name of memory. but do you know that What is memory (What is computer memory in Hindi), what are the types of memoryAnd How is memory measured? You may hardly know the exact answer to all these.

In today’s article we will tell you Memory Kya Hai in Hindi We are going to give complete information about it, which will prove to be very useful for you. And after reading this, all your questions related to memory will be over, so let’s start without any delay, know more about this article. what is memory,

What is Computer Memory

Just as whatever activity we do in our life is stored in our brain, similarly in the computer data Or memory is used to store information. Computer memory is similar to human brain. 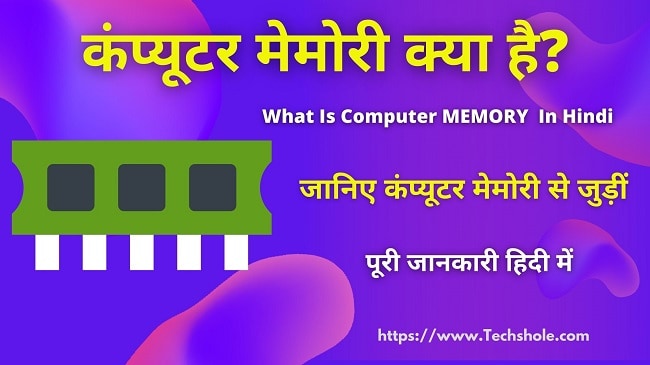 Memory is an important part of a computer whose job is to store data and instructions. computer system Have to store in. In turning on the computer, memory is used to run any program in the computer.

Whenever any instruction is given by us to the computer, CPU Accesses data from memory itself.

Memory is divided into small parts and each part is called a cell. The data in these cells is stored in the form of Binary Digit (0,1).

Memory is used to remember or store data in a computer, which is called Computer Memory.

There are mainly three types of computer memory –

Now let us understand these three one by one –

primary memory The main memory of the computer is, which is part of the CPU. Due to being engaged in the CPU, this memory is also called Internal Memory.

Current work running in the computer is stored in this memory only. Primary memory is also called working memory of computer.

No electronic device can run without primary memory.

The storage capacity of primary memory is limited, it stores only the data which is of great use.

There are mainly 2 types of primary memory –

RAM (Random Access Memory) RAM is a Temporary Memory, which stores the current work running in the computer on the Temporary Base and after the power is turned off, all the data stored in it gets erased.

RAM is a volatile memory. And all the programs running in the computer run in RAM only. RAM is an important part of computer memory.

There are also 2 types of RAM

The data in ROM is stored on Permanent Base, even after the power is turned off, the data stored in ROM remains safe.

ROM there are four types

Generally, the storage capacity of secondary memory is more than the primary and its storage can be increased if needed.

secondary memory Non-Volatile memory In this, the data can be kept safe for a long time.

All the memory that we take from outside in the computer to store the data is called secondary memory.

But on the basis of structure and methodology, there are four types of secondary memory –

cache memory Computer has the fastest memory. This memory is used for fast transfer of data between CPU and RAM.

Frequently used programs and instructions are stored in the cache memory so that the CPU can work faster.

Cache memory is placed between the CPU and RAM, so that whatever data the CPU processes is stored in the cache memory. The CPU tries to get the data from the cache memory, if it gets the data then it accesses it immediately.

If the CPU does not get data in the cache memory, then it gets the data from RAM and then accesses it.

There are two types of cache memory –

When 8 bits are mixed, a byte is formed. Large sets of bits are made to measure its type of memory with more capacity.

The capacity of memory in a computer is measured in the following units, which we have told you through a table –

What is the smallest unit of memory?

The smallest unit of memory is a bit.

What is the largest unit of memory?

The largest unit of memory is Zettabyte (ZB).

What is a memory unit?

Some units have been set to measure the capacity of memory, these units are called memory units.

What are RAM and ROM made of?

What is Processing Speed ​​of Memory?

The amount of data that the memory can transfer in 1 second is called Processing Speed ​​of Memory. For example, if the memory is transferring 100 KB of data in 1 second, then the processing speed of the memory will be 100KBps.

Conclusion: What is computer memory in Hindi

So friends, now you guys must have understood very well that Memory Kya Hai In Hindi And memory How many types are there? That’s all in today’s article, I hope you liked this article written by us. What is Computer Memory in Hindi Do share the article with your friends as well and keep visiting our blog to read articles full of knowledge of this type.