What is ROM in Hindi: whenever we computer either Android When buying a mobile, we definitely talk about RAM and ROM, but many people do not know very well what these two are and what they are used for.

RAM We have told you about (rem) in our previous article. In today’s article, we will give you information about ROM. By which you will understand how important part of the ROM system is.

Through this article, we ROM Types of And will also tell about its benefits and also give information about Stock ROM and Custom ROM, so stay with us, read till the end of this article, so let’s start – What is ROM in Hindi,

What is Computer ROM?

The full name of ROM is Read Only Memory. As it is clear from its name, we can only read ROM, we cannot write it. Data is already fixed in ROM, something new in it Data Can’t add. This is Non Volatile Memory, which keeps our data permanently safe for a long time. 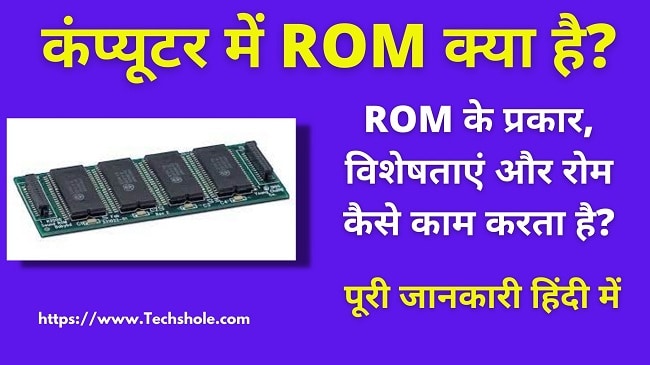 ROM is used to store audio, video, image, file, application in computer. If we have more data then we pen drives, memory card, hard drive Can use and move data from one place to another.

ROM ka full form hota hai – Read Only Memory ie such Memories Which can only be read.

ROM is the Permanent Memory of the computer in which the data is already added by the manufacturer and after that no other data can be added to it. It helps the system to be on.

Let us now know about some features of ROM –

Tell the type of ROM – Type of Read Only Memory

By now you must have realized that what is rom These Hindi, Now let’s know about the types of ROM.

There are mainly four types of ROM.

The full name of MROM is Masked Read Only Memory. The data stored in it cannot be changed. It is already pre-programmed. MROM was used earlier but is no longer used.

User data in PROM can be updated only once. Once the data is added, no changes can be made in it.

When the user buys PROM, he can write the data once in it. The device used to write data is called PROM Burner.

Since once the data is added, no changes can be made in it, hence it is also called OTP Chip (One Time Programmable).

Symptoms of prom (Characteristics of PROM,

You can program the data in EEPROM by erasing it 10 to 15 thousand times. It takes only 6 to 10 milliseconds to erase the data.

In this, there is no need to empty the entire chip to erase the data. You can program again by selecting an area, erasing it.

From the information given so far, you must have understood what ROM is, now let us know about some of the benefits of ROM –

The way ROM works is that whenever we turn on the computer, the computer does not know that the CPU along with it, Mouse, Keyboard e.t.c hardware are also attached. all of them BIOS (Basic Input Output System) is called.

ROM chip is shaped like this BIOS computer Operating System Connects to and helps in turning on the computer.

ROM Motherboard And it is connected to the CPU, inside it we can save any data like Application, Multimedia, software, Files etc. This is a Permanent Storage.

ROM is an important part of our computer, without ROM nothing data can be stored in the computer. It helps to turn on the Booting Process and system.

We Learned: What is Computer ROM in Hindi

Through today’s article, we have given you Computer ROM And has given complete information about ROM in detail. Along with this, you have been told about the four types of ROM very well.

After reading this article completely What is ROM? You must have understood about it very well. We hope that like every article of ours, you must have got to learn a lot from this article. Do share this article with your friends too so that they too can know about ROM better.