Linux Operating System in Hindi: if you computer Or if you are using mobile, then you must have heard about the operating system as well. There are many operating systems available in the market like Windows, Android, Linux etc.

We have given you this blog techshole first in Android And Windows Have told about, in today’s article we will tell you that What is Linux, History of Linux, Features of Linux Operating System and What is the difference between Linux and Windows.

Linux is an operating system designed for computers, laptops etc. But most computers use Windows, due to which people do not know much about Linux. We have written this article for you so that you can also get information about Linux.

If you also want to know what is Linux, then definitely read this article till the end. So without wasting any time let’s start – Linux Operating System In Hindi. 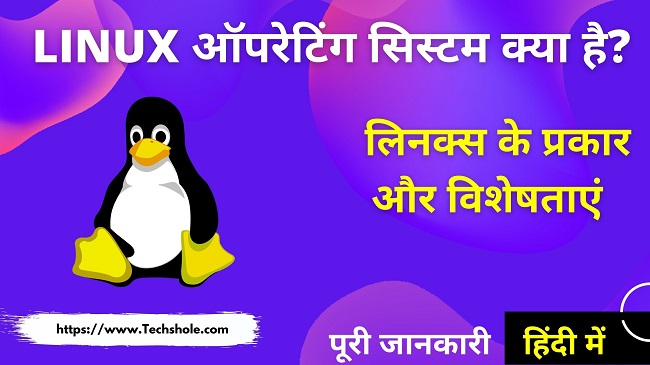 Linux is an operating system like Windows, Mac and UNIX, although it is quite different from all of them. Linux an Open Source Operating System Which is used in computers and laptops. Since Linux is absolutely Free and Open Source under the GPL v 2 license, you can easily use Linux by downloading it from the Internet.

In fact, at that time Torvalds wanted to make Linux similar to Minix OS, which was similar to Unix. And it was mainly used in Academic Setting. When Torvalds developed Linux, he was a student at the University of Helsinki.

At that time Torvalds had developed Linux for his computer, actually he wanted to buy Unix 386 intel computer, but his financial condition was not so good that he could buy this computer and thus a small program of his gave the world Gave operating system like Linux Kernel.

There are many versions (variants) of Linux operating system available which are suitable for all types of users. Different versions are available for everyone from a new user to an Advance user in Linux. Linux Version itself is called Distribution. All Linux Distribution can be easily downloaded.

Some of the major Linux distributions are as follows –

Mainly three components of Linux Operating System are as follows –

Kernel is the main part of Linux. It is responsible for all the activities happening in the operating system. There are also many other modules in Kernel that interact directly with the underlying hardware.

System Libraries are those special functions or programs that can be used to access the features of the Application Program or System Utility kernel. These system libraries implement most of the functionality of the operating system.

System utilities are programs that are responsible for specific, individual-level tasks.

Difference Between Windows and Linux

Following are the differences between Windows and Linux –

Linux was created by Linus Torvalds in 1991.

What are the basic components of Linux operating system?

How many bit operating system is Linux?

Linux is a 32 bit operating system.

We Learned: What is Linux Operating System in Hindi

After reading this article you must have understood that What is Linux In English, Linux is a great operating system that provides many features to the user. But compared to Windows, Linux has not been able to establish its supremacy that much, so Windows is used in most of the computers.

I hope you like this article written by us What Is Linux Operating System You must have liked it, share it with your friends as well and help us in conveying the right information to other people.