Type Of Optical Disk Drive In Hindi: You must be familiar with the round shiny looking disc with the help of which we used to store movies, games, songs etc. These were CDs or DVDs called optical discs.

5 – 10 years ago from today, almost everyone would have used this disc, but today this disc has disappeared somewhere. internet Due to the popularity of everything, everything is available on the Internet, so in the present time, the time of storing movies in CD, DVD has also gone.

In this article you will get very useful information about optical disc, so read this article till the end. So let’s start today’s article without delay. 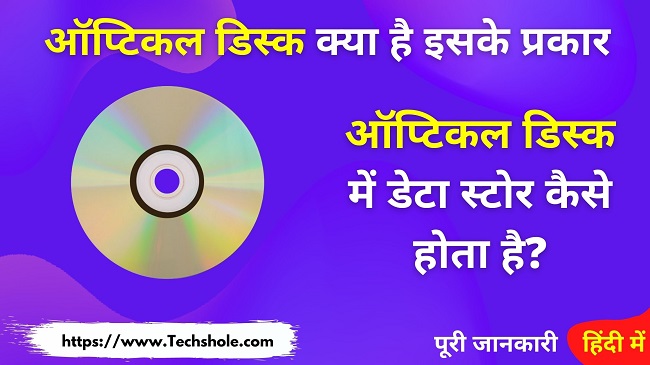 What is Optical Disc

Optical discs are round shiny discs whose diameter can range from 3 inches to 12 inches. And its thickness can be up to 0.05 inches. In today’s time, the use of optical discs is rarely seen.

But talking about 5 – 10 years ago, optical disc was a popular storage device. The biggest reason for the decrease in the use of optical discs is its storage capacity. And with the advent of the Internet, almost everything is obtained on the Internet, so this disk is not used much.

There are mainly three types of optical discs – CD, DVD and Blue Ray. Blue Ray disc is the most commonly used optical disc in today’s time.

The first technology to store data through light on hard medium was invented by James T. Russell in the late 1960s. Russell’s initial structure was similar to that of the present-day optical disc.

In the 1970s, Russell continued to refine his design. That’s where the CD started.

In 1982, Philips and Sony together presented the first commercial CD player to the world. After this CD started gaining popularity.

in optical disc Hard Disk Drive (HDD) or Solid State Drive Storage capacity is very less as compared to (SSD), although continuous efforts are being made to increase the storage capacity in it.

How is data stored in an optical disc?

Optical storage, an electronic storage medium that uses low-power laser beams to record and retrieve digital (binary) data. In optical-storage technology, a laser beam encodes digital data on an optical, or laser, disc as small pits arranged in a spiral track on the disc’s surface.

A low-power laser is used to read these tiny pits. scanner is used, in which the intensity of the light reflected from the pits is converted into electric signals. This technology is used in compact discs (CDs), which record sound. Images, text and sound can be stored in CD.

What is Optical Disc Drive

Compact Disc is an optical disc in which data is stored permanently. CD one optical ROM In this, the data is already stored by the manufacturer companies, and users can only read the data stored in the CD. Laser light is used to read the data in CD.

The storage capacity of CD is around 700 MB, much more than that of Floppy Disc and less than DVD and Blue Ray Disc.

The advantages of optical discs are:

Who invented the optical disc?

The optical disc was invented in 1960 by James T. Russell.

Why are optical discs used?

What is the storage capacity of optical disc?

How is data stored in an optical disc?

The data in the optical disc is stored by the laser beam.

You have learned: What is Optical Disc in Hindi