Python Language: if you computer Programming ie coding If you are interested in and want to become a programmer then you need to know about Python language. Because Python is a high level programming language which is used in Artificial Intelligence, Machine learning etc. Learn Python Language In Hindi.

You should have all this information before learning Python, so let’s start this article and know what is Python.

python (python) It is a high level computer programming language which is used AI, machine learning, Data Analytic, is done in Application Program etc. It is an Object Oriented Language. 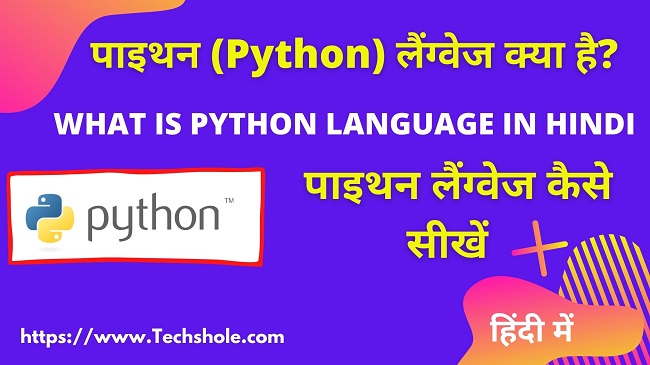 Python is a free and open source language, its code can be used by any Operating System Can be done in

Python’s code is easy to write, read and understand, so after a little effort, the Python language can be learned easily.

Due to its amazing feature, Python is a popular language in the world today. It is used in many works. We will know about all these in the next article.

The Python language was created by Guido Van Rossum in 1991. Its first release version was 0.9.0. Concepts like Classes, List, String etc. were used in this.

By the way, Guido Van Rossum started working on Python since 1980. Python was started in the National, Institute for Mathematical and Computer Science Netherlands.

Gradually the use of Python started increasing and it became a popular language. Python’s versions are updated from time to time, about which we will learn further.

Many people think that Python is named after the python snake, but it is wrong. Python Language is named after a British TV show “Monty’s Python Flying Circus”.

python Language has many features. About which a person learning Python needs to know.

Syntax of Python is very easy. Its code is also very easy to write. Python’s coding is easy as compared to other programming languages ​​such as C language, C++ Language, JAVA e.t.c.

Python is an Open Source Programming Language. You can use it for free. You can download its source code, use it and share it with others.

An important feature of Python is that it is an Object-Oriented Programming Language. It supports concepts like Classes, Object Encapsulation.

Python is a portable language. Like if you have Python’s code in window then you can use Same Code in Linux, Unix, Mac etc. also there is no need to change it.

Python is a high level programming language. When writing a Python program, there is no need to remember its System Architecture, nor does it need to manage its memory.

Python is an Integrated Language. Its code can be integrated with other languages ​​such as C Language, C ++ Language.

Python is an Extensible Language. You can also write Python code with other languages ​​and compile them as well.

There are many modules available for creating Graphic User Interface in Python. Such as PyQt4, PyQt5 etc.

By now you must have understood that Python Now let’s know about its benefits.

Python is a popular language. The world’s biggest tech companies use Python. Python is used in the following works –

Advantages and benefits of Python (Advantage of Python Language in Hindi)

As we learned in the article that Python is a High Level Programming Language and it is used in big works, so learning Python can be beneficial for you.

Python code is easy to write and learn as well. You can easily learn Python Language in 1 – 2 months. You can learn Python online for free and you can also learn it by taking offline coaching.

There are many sources available to learn Python language. In this article we will give you information about them.

You can also learn Python language by reading from books. best book to learn python Python Is.

Apart from all these, you can also learn Python by taking admission in coaching institutes.

Python was discovered by Guido Van Rossum in 1991.

Is the Python language named after a snake?

No Python language is not named after a snake, it is based on a British comedy serial Monty’s Python Flying Circus?

Which is the latest version of python?

Conclusion: What is Python

So friends, this was the complete information about Python language and if you want to become a programmer by learning Python, then use the source to learn Python. I hope you like this article written by us what is python in hindi Must have liked it.