RBI Full Form in Hindi: Do you know What is Reserve Bank of India, what are the functions of RBI, where is the headquarter of RBI located, and when RBI was established. If you do not have information about RBI, then you are on the right place to know about RBI, because in this blog post we have shared all the information related to RBI with you.

If you are preparing for a government exam, or if you are a student, then it is very important to know about RBI because many questions are often asked about RBI in the exam. Along with this, every common citizen should also have information about RBI.

RBI of India central bank Which makes rules for all other banks in the country, if any bank cheats you then you can complain about it to RBI, so in this article we have also given you the contact numbers of RBI.

So stay tuned till the end of the article and we start today’s important article without any delay – What is Reserve Bank of India in Hindi, 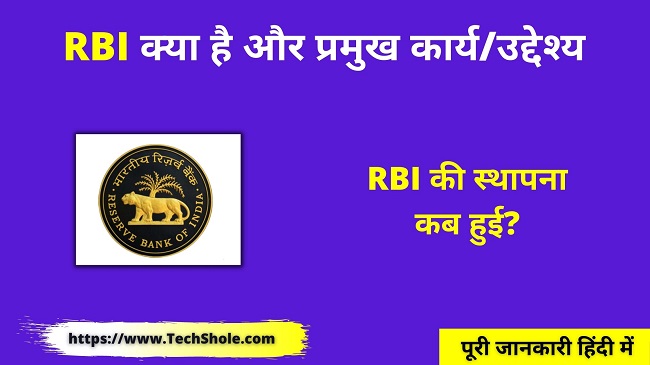 What is Reserve Bank of India (What is RBI in Hindi)

RBI acts as the regulator for all other small and big banks in India and operates its bank following the guidelines of RBI. The work of controlling the economy of the country is also done by the RBI, the account of all the currency of India is kept by the RBI.

Indian economist Dr. Bhim Rao Ambedkar played an important role in the establishment of RBI. RBI could be established only on the basis of his guidelines. Sir Osborne Smith became the first Governor of RBI. Below we have told you the names of all the governors of RBI and their tenure through a table.

Name and tenure of all the governors of RBI so far

RBI has many functions to control the banking system of the country. In this article, we have told you about some of the major functions and objectives of Reserve Bank of India.

Reserve Bank of India has the monopoly to print notes. RBI prints all notes except Re 1 note only. The work of printing 1 rupee notes is done by the Ministry of Finance, it is signed by the Finance Secretary.

other country commercial bank RBI works for banks in the same way as they work for their customers. Reserve Bank of India gives loan to any bank that needs money.

#3 – Regulator for the Banking System

RBI acts as a regulator to protect the interests of the citizens of the country. All the banks in the country work according to the guidelines of RBI, and the bank which does not follow the rules of RBI takes away the status of RBI bank. Along with issuing guidelines, RBI keeps on monitoring the banks.

#6 – Economy of the country

All these come under the main functions of RBI.

If any bank cheats you, then you can tell your problem to RBI by calling the helpline number issued by RBI. Following are all the contact numbers of RBI –

After reading the article till here you What is RBI would have understood well.

Some interesting facts about RBI

Now let’s know some interesting things about RBI which you will hardly know.

What is the full name of RBI?

The full name of RBI is Reserve Bank of India.

When was RBI established?

RBI was established in the British Raj, but Babasaheb Dr. Bhim Rao Ambedkar played an important role in the establishment of RBI.

Who was the first governor of RBI?

The first Governor of RBI was Sir Osborne Smith.

Who is the present Governor of RBI?

Where is the headquarter of RBI located?

The headquarter of RBI is located in Mumbai, where the governor sits and policies are implemented.

What is the symbol of RBI?

The symbol of RBI is palm tree and tiger.

What was the old name of Reserve Bank of India?

When was RBI nationalized?

Conclusion – What is Reserve Bank of India in Hindi

so guys it was Reserve Bank of India Complete and important information about, in which we know what RBI is, when RBI was established and what are the functions of RBI. Apart from this, in this article, we have also told you some interesting information about RBI so that you get to learn something new.

How did you like this article? You can tell us in the comment box, and if you got to learn something from this article, then share it with your friends on social media and also tell them about RBI.