System Software Kya Hai In Hindi: as you must know computer There is a combination of hardware and software, both of which together form a computer system. in the computer Software And hardware There are also many types, about which we have told you in our previous articles.

If you are not aware about the things asked above about system software, then today’s article is going to prove to be very important for you. In this article, we have given you complete information about what is called system software. 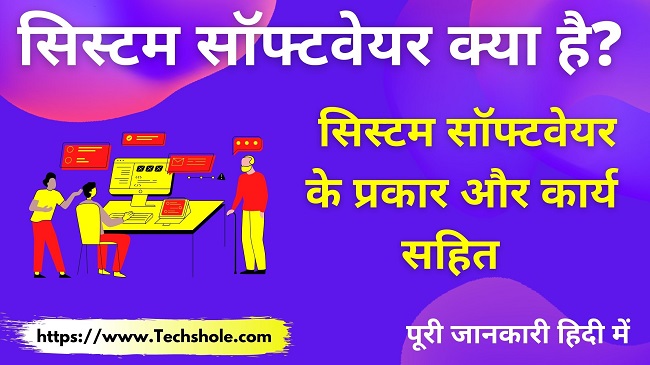 So let’s start without taking much of your time, know more about this article Explain what is System Software.

What is System Software

System software is called computer program that manages the hardware of the computer and application software operate the. The computer becomes workable only with the help of system software. They bring life to lifeless hardware.

System software is a computer program that controls the hardware and application software in the computer.

There are many types of system software, about which we have told you below –

Whenever we connect any other device to the computer, it is necessary to have the driver installed in the computer like mouse, keyboard Drivers are installed for everyone.

Overall, through the device driver, the computer is able to recognize which device is connected to the computer and what is its function.

Firmware is an operational software which ROM or EPROM memory is embedded in. It controls all the activity done by all the hardware. Firmware provides information about how a hardware will interact with the device.

Utility Software They are software that work between the user and the application software. Utility software provide security to the computer. They do the work of Optimize, Maintain and Configure the computer like Anti Virus, Security, Backup, Network Programming etc.

The main features of system software are as follows –

What is the main function of system software?

What are system software?

What do you understand by system software?

What we learned: What is System Software in Hindi